I can hardly believe our little guy turned half a year this month! At first it seemed to fly by and move slowly–something only parents who are waking with their newborn every two hours to feed would understand. Now the days, weeks, and months have become a blur. Like most mama’s wishes, I can imagine, I am pleading that time slow down.

WEIGHT + LENGTH: We had Raleigh’s check-up just two days after his six-month mark, and he weighed 14 lb 7 oz and measured 26.77 inches long. Raleigh has always been a little one, weighing 6 lb 14 oz when he was born, with a slow start after that with our initial nursing struggles. We’ll be back in another six weeks to do a weight check just to make sure he keeps progressing.

SLEEPING: Raleigh has been sleeping for long stretches since very early on, and has been sleeping all the way through the night without any night wakings for a couple months. I thought we would have a consistent nighttime routine with something along the lines of lotion, reading, and prayer, but Ryan and I only get a couple hours with him in the evening before he goes to sleep so we honestly just play and snuggle with him all the way up until bedtime. We put him down at 7:30 pm, I dream feed him around 10:30 pm, and he wakes up at 7:00 am.

Naptimes are a completely different story. He started at daycare before he led us on any sort of schedule. At this point, I don’t expect him to have consistent naptimes until he is much older. On the weekends and days we are with him for the full day we just wing it. This sometimes means tired cries, nursing to sleep, and even co-sleeping. But I don’t particularly mind the extra snuggles!

FEEDING: Raleigh has been exclusively breastfed (EBF) via breast or bottle. I nurse him first thing in the morning when he wakes up around 7:00 am. And at daycare he takes 6 oz every three hours totaling three bottles at daycare. Then Ryan gives him a bottle with his probiotics once they get home from daycare. Including his dream feed, this is a total of six feedings per day. When he’s at home with me I nurse him on-demand with no schedule.

At six months and three days we started babyled weaning (BLW). I was planning to wait as long as possible, but with Raleigh being in a low percentile with his weight we decided to start sooner than later, especially since we know that Raleigh won’t actually consume much of anything for a while as we are mostly following the BLW method versus spoon-feeding cereals and purees.

After a trip to IKEA to pick up a highchair, we started Raleigh off on some steamed purple heirloom carrots. Surprisingly, we think he got one swallow down. The next day we gave him a few chunks of apples that he didn’t seem to care much for. And later on we gave him a stalk of kale to munch on. So far we have added pears and sweet potatoes to the mix. Like most parenting philosophies and theories, we won’t follow BLW 100%. I imagine that I will incorporate some fun purees after a while (we’ll be using lots of online resources and this great book I got at my baby shower!).

DIAPERING: We have been cloth diapering since Raleigh was about two weeks old. We waited until his umbilical cord stump had completely fallen off. We did so much research while I was pregnant on which type and brand of cloth diaper to use. Although many blogs said that ordering several different kinds to see which works best for you was helpful, we ended up collecting all BumGenius 4.0. We do keep one pack of disposable diapers (Honest Co. or Seventh Generation) in his size on-hand, though, for back-up at daycare if he goes through the cloth diapers we provide each day.

We also use reusable cloth wipes, which have worked incredibly well. I use them with a bottom spray–so far Honest Co. and BumGenius have been great, but I plan to make my own (recipe below) when I run out. The disposable wipes we keep on-hand and provide to daycare are Babyganics. We like Honest Co. and Seventh Generation as well, but Babyganics always seems to be on sale at Target.

We have found that Honest Co. diaper rash cream and healing balm work well to prevent and treat diaper rash. Raleigh has only ever had a small red mark or two at the leg opening of his diaper, but after one application of balm or cream it is typically gone by the next time his diaper is changed.

LAUNDRY: After several trials and errors plus chatting with other mamas who cloth diaper, we have discovered that Tide powder works best for cleaning the diapers. No rinsing required, but we do turn the washer on soak for 20-30 minutes before starting up the cycle. All other laundry is washed in a natural soap, but we made the easy sacrifice for clean diapers!

BATHTIME + BODY CARE: The American Academy of Pediatrics states that babies under one year only need baths around three times a week. We actually bathe Raleigh less–on Wednesday and Sunday evenings, plus as needed. He has dry skin like his mama, and it hasn’t been necessary to bathe him more than that, even though he does love splashing in the water. Since he was a couple weeks old we started him in the 4moms infant tub, and he will be graduating to the big tub soon (and I plan to get this 4moms spout cover to help me manage the temperature).

I am still using up all of the bath goodies I got from my baby shower–Honest Co. wash followed by Burt’s Bees lavender lotion is our current routine. We also have a collection of Aveeno products that we have used as well. For Raleigh’s dry skin we use Burt’s Bees All-purpose Ointment and Trader Joe’s coconut oil.

MILESTONES: Lots has happened in six months! Rolling over both ways, smiling, holding objects, giggling, and most recently — two teeth and sitting up. As a mama, it is hard not to compare with other babies and their development, but we are so proud of our Raleigh and just how much he is learning. He is very social and interactive, and we feel confident that this mostly comes from his weekday time at his daycare, which we just adore.

OUR FAVORITES
TOYS: I’ll put his teethers in this category. He especially loves his Sophie la Giraffe and robot teethers, loves to chew on his wooden rattle (seen here), but will mostly put anything in his mouth–especially things that you don’t want him to put in his mouth. His Jellycat lovey, Edgar-Earlobe the Elephant, (and Daddy) make him laugh the most. And the toy we keep with his carseat is his Mortimer the Moose.
Raleigh didn’t seem to prefer his 4moms Mamaroo at first, but now it’s a pretty big hit. And even though he rolls around, he does still like to play under his baby gym. I wasn’t a fan of a lot of the options available at toy and baby stores, but I found a few wooden ones that I felt would be more complementary to his nursery, while still providing him the play development he needed. Next thing I knew, though, Raleigh’s great uncle Larry made one himself and gifted it to us. This is a very special toy for us, and we can’t wait to get more use out of it in the future. 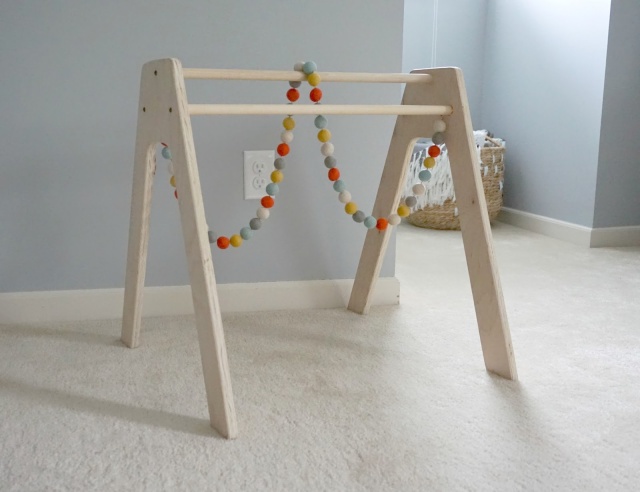 Felt Balls (Hello Maypole)
GEAR: We actually registered for the Ergobaby 360 baby carrier, but ended up getting the Infantino 4-way. Ryan uses this every time we go out and he loves it. I enjoyed my Solly Wrap when Raleigh was younger, but am now leaning towards ordering a ring sling since it seems quicker to get on. We use our BOB Revolution jogging stroller for longer outings, but the carriers are our go-to!
Bottom Wash Recipe:
xo,
R

This site uses Akismet to reduce spam. Learn how your comment data is processed.